Jimmy Cricket returned to the Lyndene Hotel on the historic night England beat Denmark to reach the 2020 Euros final.

Gareth Southgate’s side ended the country’s 55-year wait to compete in another major men’s final with a 2-1 win at Wembley on Wednesday.

England had gone behind on the half-hour, conceding their first goal of the tournament to Mikkel Damsgaard’s superb free-kick.

And, in the first half of extra time, the hosts finally went ahead.

Raheem Sterling was controversially deemed to have been fouled by Joakim Maehle in the box.

The Wembley showdown with Italy on Sunday night is England’s first appearance in a major football final since the Three Lions’ 1966 World Cup victory against West Germany.

It was a momentous Wednesday night for famous funnyman Jimmy to be performing on stage, particularly at the Lyndene – his favourite Blackpool hotel.

He tweeted: “So last night I went on stage at the Lyndene Hotel in Blackpool after the England and Denmark match and said: ‘Are you ready for this…

“‘Well folks, you’ve had the Football and now it’s time for the Cricket.'”

Jimmy had been eagerly awaiting his return to the Lyndene (see the image below). 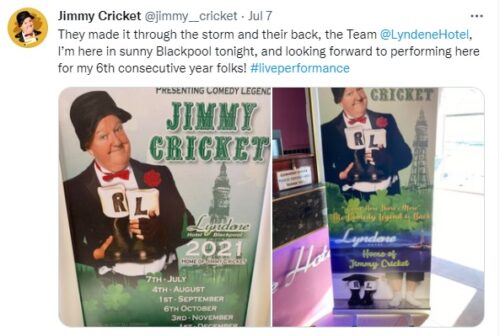 Pandemic apart, he has appeared regularly on the popular Lyndene’s two stages.

His performances at the Lyndene were limited during 2020 following the restrictions imposed because of coronavirus.

Jimmy did his last show there in September before another lockdown resulted in the closure of hospitality venues.

He is appearing once a month at the Lyndene until the end of the year.

The Northern Irish entertainer has enjoyed five successful seasons at the seaside venue.

Oxton show: ‘Lovely to be back doing the job I love’