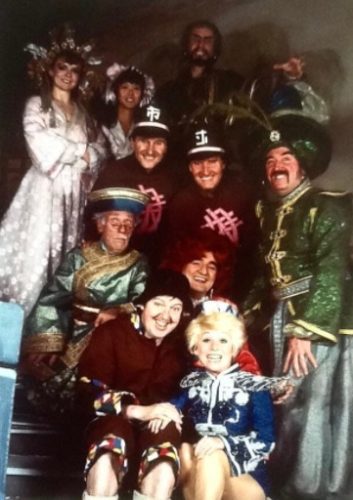 The late Barbara Windsor lit up the stage with her “vitality and energy”, says Jimmy Cricket.

Comedian Jimmy performed alongside Dame Barbara in a production of Aladdin at the Theatre Royal in Nottingham during the 1985-86 panto season.

The photo right is of the entire cast from Aladdin, with Jimmy at the front with Barbara.

He said: “So sad about the passing of Barbara, the enclosed photo is a picture of the Aladdin cast, at the Theatre Royal Nottingham.

“Babs was principal boy, and her vitality and energy lit up the stage.

“She will be sadly missed by all her fellow pros and fans alike!

Jimmy took the role of Wishee Washee in the Nottingham panto.

The Patton Brothers, Brian and Jimmy, played the Chinese Policemen, while Billy Dainty was Widow Twankey.

Actress Dame Barbara, who was best known for her roles in EastEnders and the Carry On films, died on Thursday aged 83.

She passed away peacefully from Alzheimer’s, having been diagnosed six years ago.

Her last appearance in the soap was in 2016.

The same year she became a dame for her services to charity and entertainment.