A group of performers based in Kent will take to the stage later this month alongside well-known comedian Jimmy Cricket.

The 28 November show – to be staged at the Astor Community Theatre in Deal – will see local funnyman Phil Hoyles as Jimmy’s special guest, alongside dancers from the venue’s own School of Performing Arts.

Under the direction of Sarah Dean, the dancers will provide several routines, which will not only showcase the talent of the young performers but also add an extra dimension to Jimmy’s UK touring show and complement his stand-up comedy.

Phil is not only performing his well-received tribute to Tommy Cooper, but is the show’s co-promoter as well. 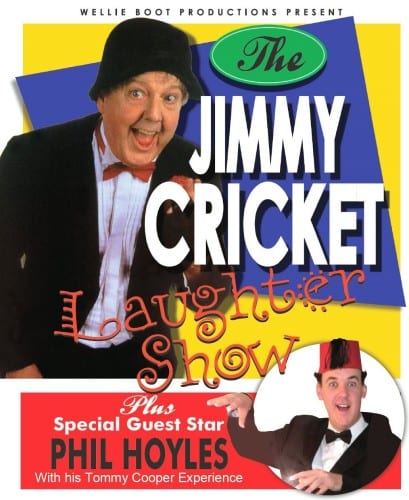 He said: “I am really pleased to be able to team up with Jimmy to bring him to the Kent coastline. He is such a formidable performer who has been going for so many years, but who can still put a crowd in stitches!”

Sarah commented: “When I was approached by Phil Hoyles on whether I would like to get involved, I could not refuse as this is a really good performance opportunity and a chance for the school to be talked about in such exalted company.”

Jimmy, 70, said he was thrilled to welcome Phil and the Astor School of Performing Arts as “great additions” to the show.

He added: “It also means a local involvement when I visit the Astor in November – and I always encourage communities to support their local theatre and flag wave for its continued existence.”

The Jimmy Cricket Laughter Show comes to the Astor Community Theatre in Deal on Saturday 28 November. It starts at 8pm in the evening.

Apart from Jimmy, the show will feature a supporting cast of Phil Hoyles, May Marion and the theatre’s own School of Performing Arts.

Tickets are priced at £10 for all adult tickets and at £5 for children. For more information, visit the theatre’s website  at www.theastor.org/TheAstor.dll/Home or ring the booking line on 01304 370220.