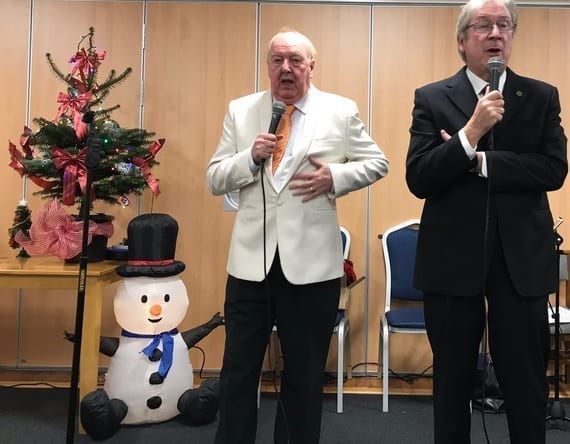 The event, hosted by the popular Northern Irish entertainer and his wife May Marion every couple of months, takes place in the lounge area of St Vincent’s parish centre in his home town of Rochdale.

It started about a decade ago as an opportunity for Jimmy and other performers to try out new routines and is still going strong.

As a result, the famous entertainer has nicknamed those who regularly support these evenings as ‘Jimmy’s Jammers’.

At every event,  there is a raffle and the selling of refreshments, with all proceeds donated to a chosen charity.

Francis House Children’s Hospice, based in south Manchester, was the beneficiary of the Christmas ‘jam’ night on Tuesday (3 December).

Jonathan Young from The Bachelors, a great friend of Jimmy’s, also appeared at the event.

The popular entertainer has raised around half-a-million pounds for the Didsbury charity over the years.
That is thanks to countless touring shows and parish hall events over almost two decades.

Francis House cares for children and young adults with life-threatening conditions.
It provides a home from home where families can receive professional care, support and friendship.

The Rainbow Family Trust was set up in the early 1990s as a charity by Sister Aloysius and Father Thomas Mulheran.

They were concerned about the lack of palliative care for the families of children with a short life expectancy.

@FatherFrankie Every time I drive past a Mulgrew lorry I give the driver a wave and he looks back at me as if I’m a nutter.