Bridlington Spa next stop for No more Fiffing and Faffing

Bridlington Spa next stop for No more Fiffing and Faffing 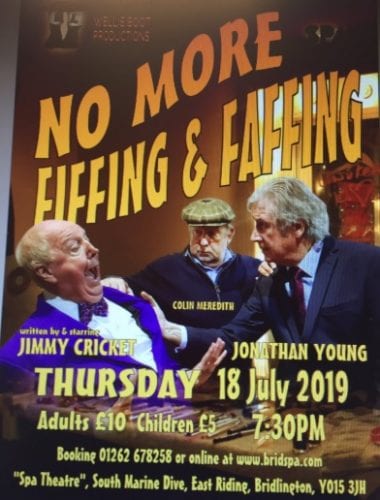 No more Fiffing and Faffing will be performed at the Bridlington Spa theatre on the East Yorkshire coast on Thursday (18 July) as part of a North of England tour.

It had its debut last September at the Blackburn Empire Theatre and has also been staged in Bury and Chorley.

You can buy tickets for the play at the Bridlington Spa theatre here.

Before then, famous entertainer Jimmy, 73, will be headlining an evening of music and comedy on Sunday (14 July) at the Preston Playhouse.

The show will raise money for Age Concern Central Lancs and the Rosemere Cancer Trust.

Ticket includes free parking (worth £3) in the Trinity Square Car Park directly across the road from the Theatre. Pick up a token from the Box Office.

There are more details about the show here.

‘A real pleasure working… with this comedy great’ at Preston Playhouse