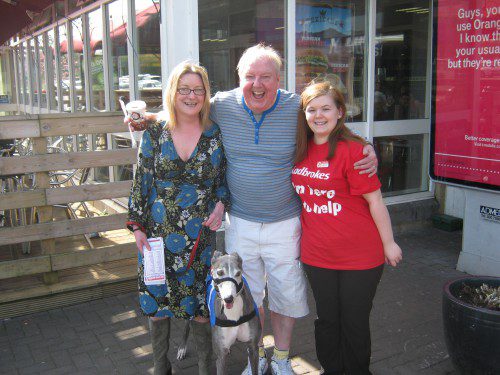 When Jimmy got there he bumped into Mel and Jenny and their greyhound called Mo Chara (who are all pictured with Jimmy). The ladies had set up a stall to promote a local bookmakers because of the Grand National, but the star attraction was the greyhound. Jimmy was told that the dog is a member of the Dumfriesshire and Cumbria greyhound rescue team and its name is actually Gaelic for “My Friend”. 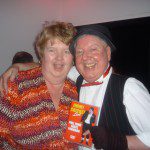 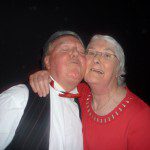 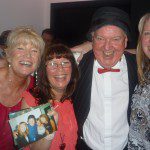 Jimmy is pictured with some scouse friends at the Green Room in Liverpool City centre. The venue has a very famous owner, who is none other than Ricky Tomlinson. He co-owns the venue with Ricky Wallace. Jimmy visited the venue a couple of months ago to appear in a Sunday afternoon charity concert to raise funds for the ongoing search for Madelaine McCann. On this occasion he even ended up with a parking ticket for his troubles! It is not going to deter him, though, from a return visit and Jimmy is going back on Saturday July 2. He likes this venue as they are trying to recreate the magical atmosphere of a proper cabaret venue, and when you factor in the warmth of a liverpudlian crowd, such a combination makes for a super place to perform at.

A couple of months ago Jimmy was privileged to participate in a commemorative evening in tribute to the late Kevin Neil. The event was held at the prestigious palace Hotel in central Manchester. Kevin Neil was a great musician and featured in the Carl Denver trio. In his later years he joined the John Stokes version of the Bachelors. Kevin had a long and distinguished career and the event reflected the warmth that fellow entertainers had for him. In the photographs you will find Jimmy and wife, May, alongside the impressionist Johnny More and his wife Jean.

As mentioned, Kevin was a part of the recreation of the Bachelors that featured John stokes, and this led to a tremendous friendship blossoming between John and Kevin. It was John who decided to organise this fitting memorial to kevin’s life and the event also raised a significant sum for a local charity. Here Jimmy is pictured with not only his wife, May, but John Stokes and his wife, Celine. 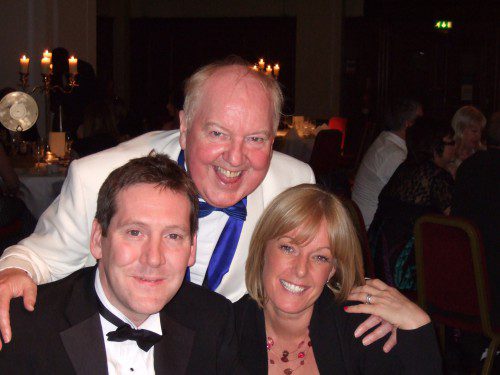 In this photo Jimmy is with John Stokes’s son, Kevin, and his partner. 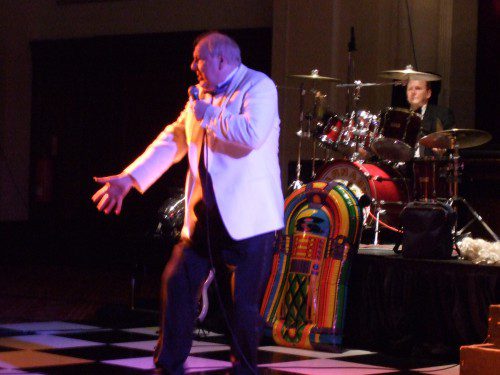 Finally, Jimmy was asked to pay his own personal tribute to Kevin, which he was very pleased to be able to do so.