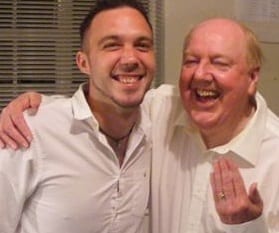 It was a busy weekend for Jimmy Cricket when he did several shows in South Wales and in England’s West Country.

The famous Northern Irish entertainer performed at the Penarth Pier Pavilion, a fully restored art deco pier pavilion in the Vale of Glamorgan, and also at the Babbacombe Theatre in Torquay at the end of June. 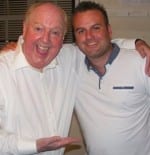 In Penarth he appeared at a comedy night that was organised by fellow funnyman Colin Howarth (who is pictured with Dan Mitchell, another comic, and Jimmy in the bottom photograph).

In the audience was one of Jimmy’s friends, Idris Charles, a former TV producer/director and Welsh language football commentator.

A couple of days later, Jimmy was in the Torbay region with a visit to the Babbacombe Theatre.

When he was there, he bumped into Stephen James (pictured with Jimmy above right) and Jamie Brown (with Jimmy in the top photo), who had come along to see the show.

And the hectic weekend also included a trip for Jimmy to Pontins Sand Bay near Weston-super-Mare in between!