You Must Be Joking 2016 plays to several sellouts

You Must Be Joking 2016 plays to several sellouts 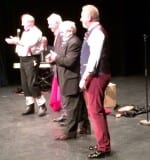 Jimmy Cricket has just finished a tour of his native Northern Ireland with a comedy show called You Must Be Joking.

The tour was born out of the 2014 Cookstown Comedy Festival, as the line-up was put together for the first time there with huge success. 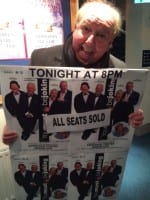 This merited a full tour of the province in 2015, with this year’s edition continuing its popularity with shows at Grand Opera House in Belfast and the Millennium Forum in Derry,  as well as at some of the major towns in the province.

The crowds were marvellous and large in number everywhere, even to the point where several venues were sold out, including the Ardhowen Theatre in Enniskillen.

Jimmy said: “I have known David for a number of years, having first worked for him during the mid-80s when I first launched myself on to the national stage.

“I would like to thank David for making You Must Be joking 2016 happen and for being a great friend and colleague over the years!”

Next trip to Spain will include Madhouse shows