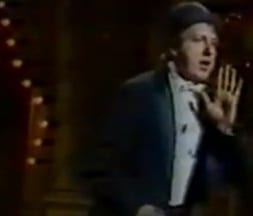 Jimmy Cricket is leading a return to the good old days in 2013.

The famous Irish comedian will  headline a national tour of a Music Hall Show which is being produced by Mark Andrews Productions.

It will feature all the typical hallmarks of a ‘Good Old Days’ format, complete with a chairman who will throw out to the audience some linguistic challenges!

More details for each date can be found within the tour dates section of this website.

Please note that most performance times are scheduled for the afternoon, but there is the odd occasion when an evening show has been arranged in addition to the matinee performance.

Bobby rung me when we lost Graham Grumbleweed, (Walker) to say that we had lost another Comic Clown, you were one of the greatest, and here is my @leponline tribute to you Bobby!🎭 @TheTommyCannon @vonvonball pic.twitter.com/QsRPivD46H

@orangehod @caroline190173 Thanks Daniel Merry Christmas 🎄 to you and your family! Stay safe my friend! x