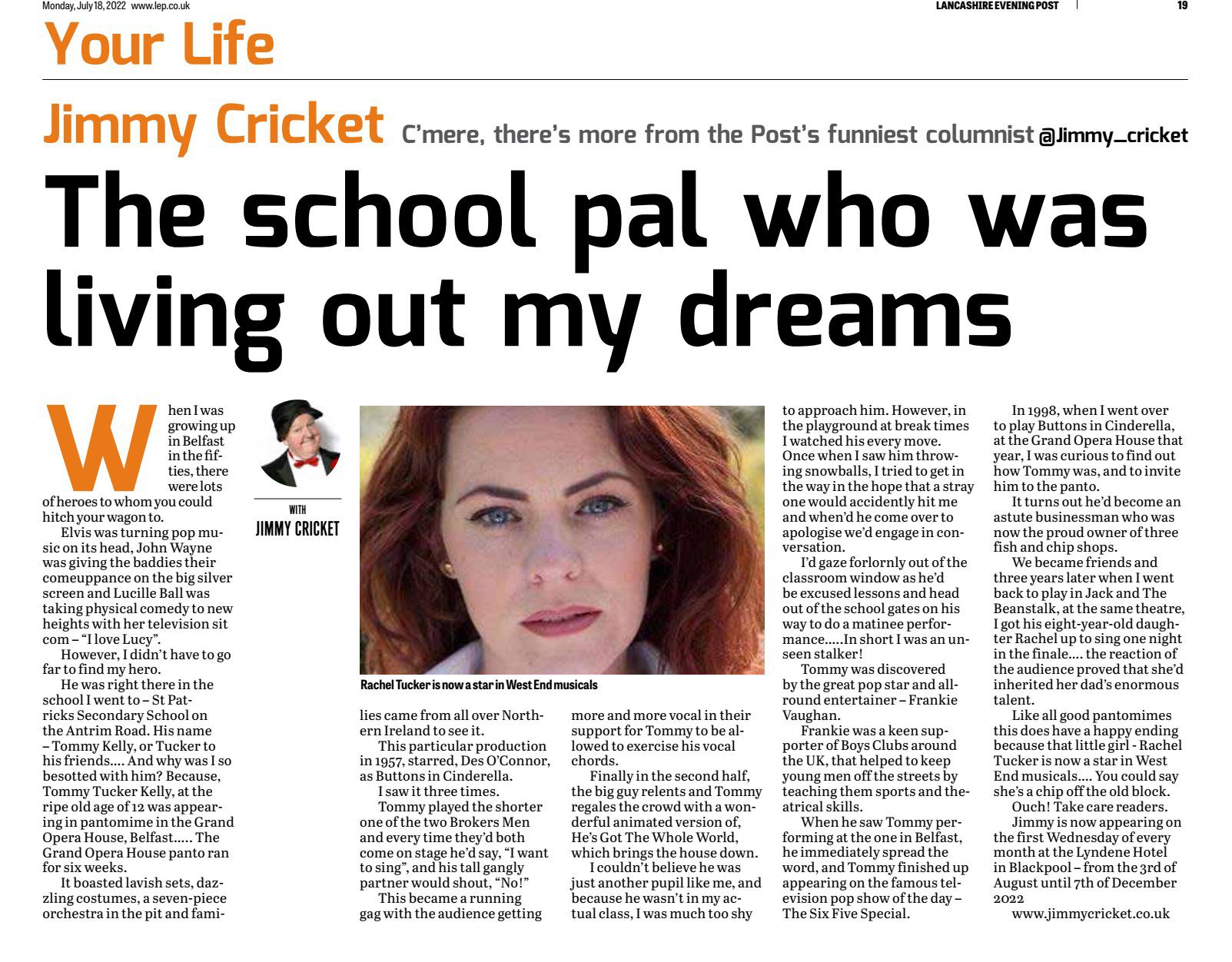 Jimmy Cricket has revealed who his hero was while he dreamed as a child of a career on stage.

The popular Irish comedian gives the answer in his latest newspaper column.

He says: When I was growing up in Belfast in the fifties, there were lots of heroes to which you could hitch your wagon.

Elvis was turning pop music on its head, John Wayne was giving the baddies their comeuppance on the big silver screen and Lucile Ball was taking physical comedy to new heights with her television sitcom, I Love Lucy.

However, I didn’t have to go far to find my hero.

He was right there in the school I went to – St Patrick’s Secondary School on the Antrim Road.

His name was Tommy Kelly – or Tucker to his friends.

And why was I so besotted with him?

Because, Tommy Tucker Kelly, at the ripe old age of 12, was appearing in pantomime in the Grand Opera Theatre, Belfast.

The panto ran for six weeks.

It boasted lavish sets, dazzling costumers, a seven-piece orchestra in the pit and families came from all over Northern Ireland to see it.

This particular production of Cinderella, in 1957, starred Des O’Connor as Buttons.

I saw it three times.

Tommy played the shorter of the two Brokers Men and every time they’d both come on stage, he’d say: I want to sing.”

And his tall, gangly partner would shout: “No!”

This became a running gag, with the audience becoming more and more vocal in their support for Tommy to be allowed to exercise his vocal chords.

Finally, in the second half, the big guy relents and Tommy regales the crowd with a wonderful animated version of He’s Got The Whole World, which brings the house down.

I couldn’t believe he was just another pupil just like me.

Because he wasn’t in my class, I was much too shy to approach him.

I’d gaze forlornly out of the classroom window as he’s be excused lessons and head out of the school gates on his way to do a matinee performance.

Tommy finished up appearing on the famous television pop show of the day – The Six Five Special.

In 1998, when I went over to play Button in Cinderella at the Grand Opera House, I was curious to find out how Tommy was, and to invite him to the panto.

It turns out he’s become an astute businessman who was now the proud owner of three fish and chip shops.

We became friends and three years later I went back to play in Jack and The Beanstalk. at the same theatre.

I got his eight-year-old daughter Rachel up to sing one night in the finale – the reaction of the audience proved she’d inherited her dad’s enormous talent.

Like all good pantomimes, this has a happy ending because that little girl, Rachel Tucker, is now a star in West End musicals.

You could say she’s a chip off the old block.