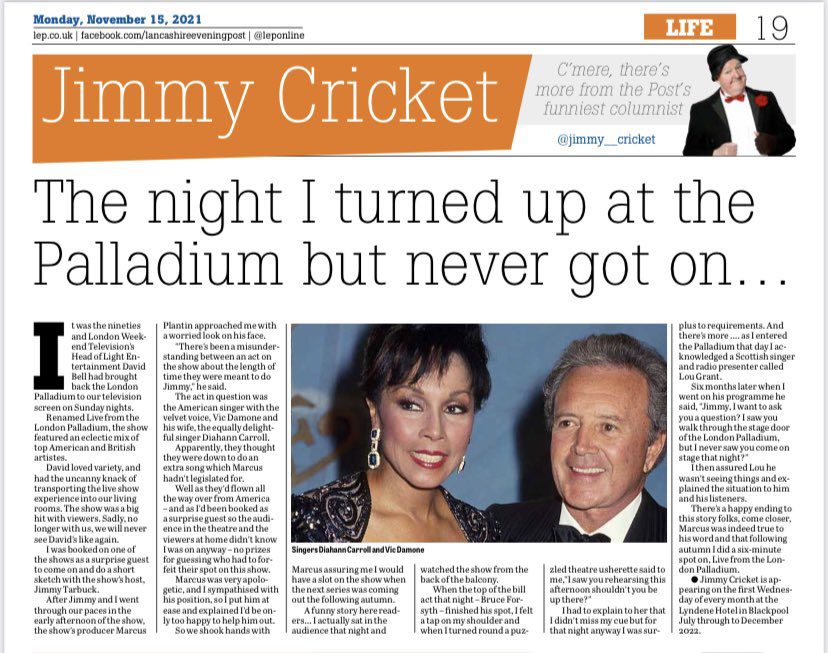 Jimmy Cricket once turned up at the London Palladium to do a sketch – but ended up waiting months to finally do it.

The popular comic had been booked for one of the shows being shown live in front of an audience and on national television.

However, as Jimmy revealed in his monthly column in the Lancashire Evening Post, things didn’t quite go to plan…

Jimmy’s column began: “It was the nineties and London Weekend Television’s Head of Light Entertainment David Bell had brought back the London Palladium to our television screen on Sunday nights.

“Renamed Live from the London Palladium, the show featured an eclectic mix of top American and British artistes.

“David loved variety and had the uncanny knack of transporting the live show experience into our living rooms.

“The show was a big hit with viewers.

“Sadly, no longer with us, we will never see David’s like again.

“I was booked on one of the shows as a surprise guest to come on and do a short sketch with the show’s host, Jimmy Tarbuck.”

However, as Jimmy recalled, one of the other acts overran because of a misunderstanding.

And as Jimmy’s sketch was a surprise one and hence not scheduled, it was his part which fell by the way.

He said he ended up watching the show from the balcony in the audience!

And there was to be a happy ending to the tale…

The show’s apologetic producer Marcus Plantin promised Jimmy a slot on the show in the next series.

Marcus was true to his word.

Jimmy did do a six-minute slot on Live from the London Palladium the following autumn.