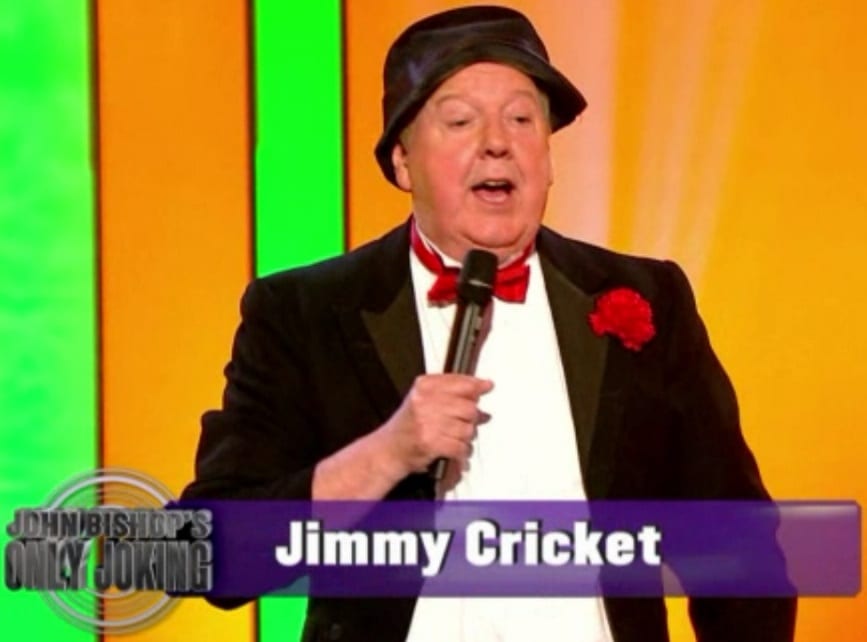 Jimmy Cricket was joined by a host of fellow comedians as he appeared in a new TV comedy series.

The Irish entertainer featured in the second episode of Sky1′s John Bishop’s Only Joking which is broadcast every Friday.

There has been some good feedback from Jimmy’s appearance, both on his Twitter feed and on his Facebook page.

He also appears in episodes three, four, five, six, seven and nine of the series which is fronted by Liverpool funnyman John Bishop.

Related story: It’s a long way from a holiday in Turkey!!

The first episode of Sky1’s John Bishop’s Only Joking is at 8.30pm (GMT) on Friday (11 January) – but you won’t see famous Irish comedian Jimmy until the second week.

“I really enjoyed recording this show with John Bishop,” says Jimmy. “I especially liked the nice touch that John went to when he sent me a note of thanks and reminded me of our last meeting on a beach over in Turkey!

“This was a few years ago when John was just starting out on his comedy career and I was in the resort where he was appearing at one of the local hotels.

“John was walking along the beach with his family and he bumped into me and I wished him all the very best with his career.

“John wrote in his note to me on the day of the recording of the Sky1 show: ‘Jimmy, great to have you on the show – it’s a long way from a holiday in Turkey!! Cheers John.’”

Jimmy says he is thrilled to be part of this new and exciting comedy series which is targeted at family viewing.

He adds: “I think it is great that not only do they have a great line-up of comedians – including an attractive mix of young comedians and legends such as Jason Manford and Tom O’Connor – but there is a nice twist that other celebrities and members of the public have also been filmed telling their favourite joke.

“The show deserves nothing but success.”