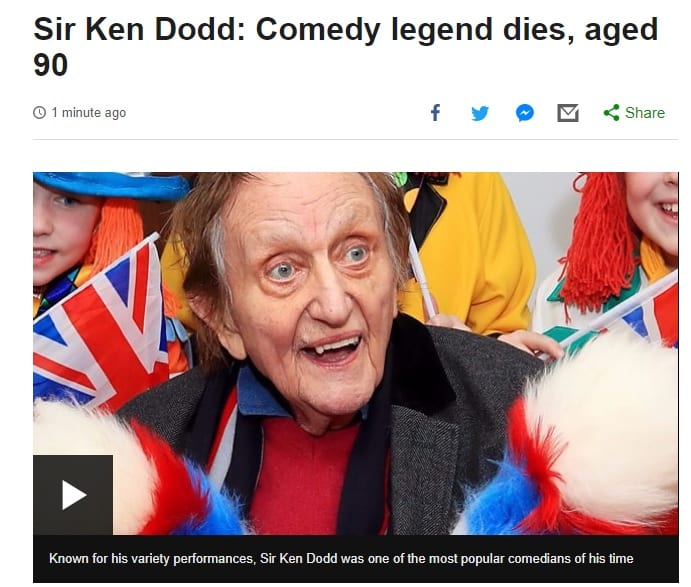 Jimmy Cricket was quick to pay tribute to his close friend and fellow comedian Sir Ken Dodd who has died aged 90.

Liverpool legend Sir Ken, creator of the Diddy Men, had recently been released from hospital after six weeks of treatment for a chest infection.

Only days before his death – which was announced this morning (Monday) – he married Anne Jones, his partner of 40 years, at their house in the Liverpool suburb of Knotty Ash.

Said Jimmy: “Sir Ken Dodd was not only our greatest ever stand-up comedian but a genuinely nice man.”

Replying to the tribute, which Jimmy had posted on his Twitter account, entertainer Bernie Clifton said: “A World without Ken Dodd is a poorer, darker place. What a Man, I’ve lost a good friend. RIP Sir.”

Liverpool Mayor Joe Anderson said a book of condolence would open later on Monday, tweeting: “We are comforted by the joy and happiness he brought the world.”

Actress and fellow Liverpudlian Claire Sweeney posted her own tribute on Twitter (below) and included photos from Sir Ken’s 90th birthday party in the city. 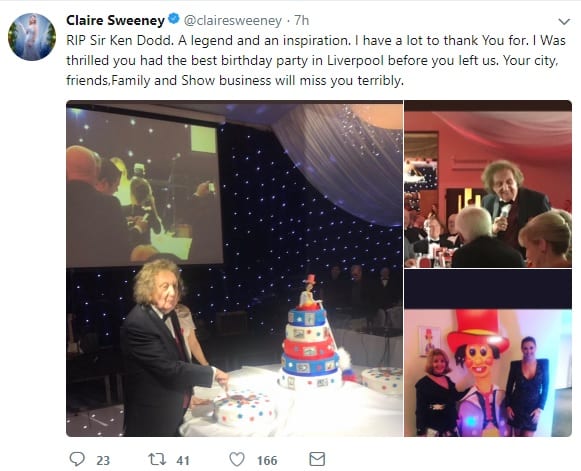 Jimmy had been among those to pay tribute to his friend and fellow entertainer Sir Ken when he was honoured with a lifetime achievement award in October.

Sir Ken had received the accolade in front of a star-studded audience at the British Music Hall Society event at the Lansdowne Club in central London.

He was famous for his very long stand-up shows, which sometimes lasted until the early hours of the morning, along with his Diddy Men from Knotty Ash and his tickling stick.

The son of a coal merchant, Sir Ken had been a comedian since 1954 and made it into the Guinness Book of Records for telling 1,500 jokes in three-and-a-half hours.

Sir Ken was also a ventriloquist and an established singer. He had many recording hits, charting on 18 occasions in the UK Top 40, and his version of Bill Anderson’s Happiness, which reached 31 in the charts in 1964, became his signature song.

His recording of Tears topped the UK singles chart for five weeks in 1965, becoming the biggest hit single in Britain that year and selling more than a million copies in the UK alone, where it was the third best selling song of the 1960s and is the 39th top selling single of all time.

His publicist Robert Holmes said: “To my mind, he was one of the last music hall greats. He passed away in the home that he was born in over 90 years ago. He’s never lived anywhere else. It’s absolutely amazing.”