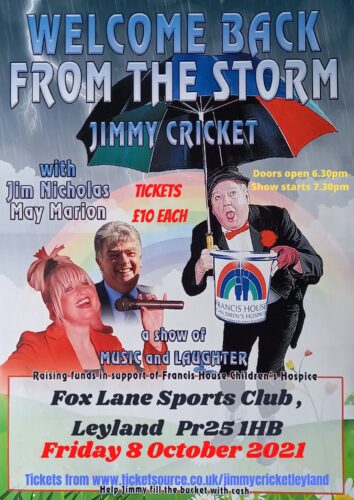 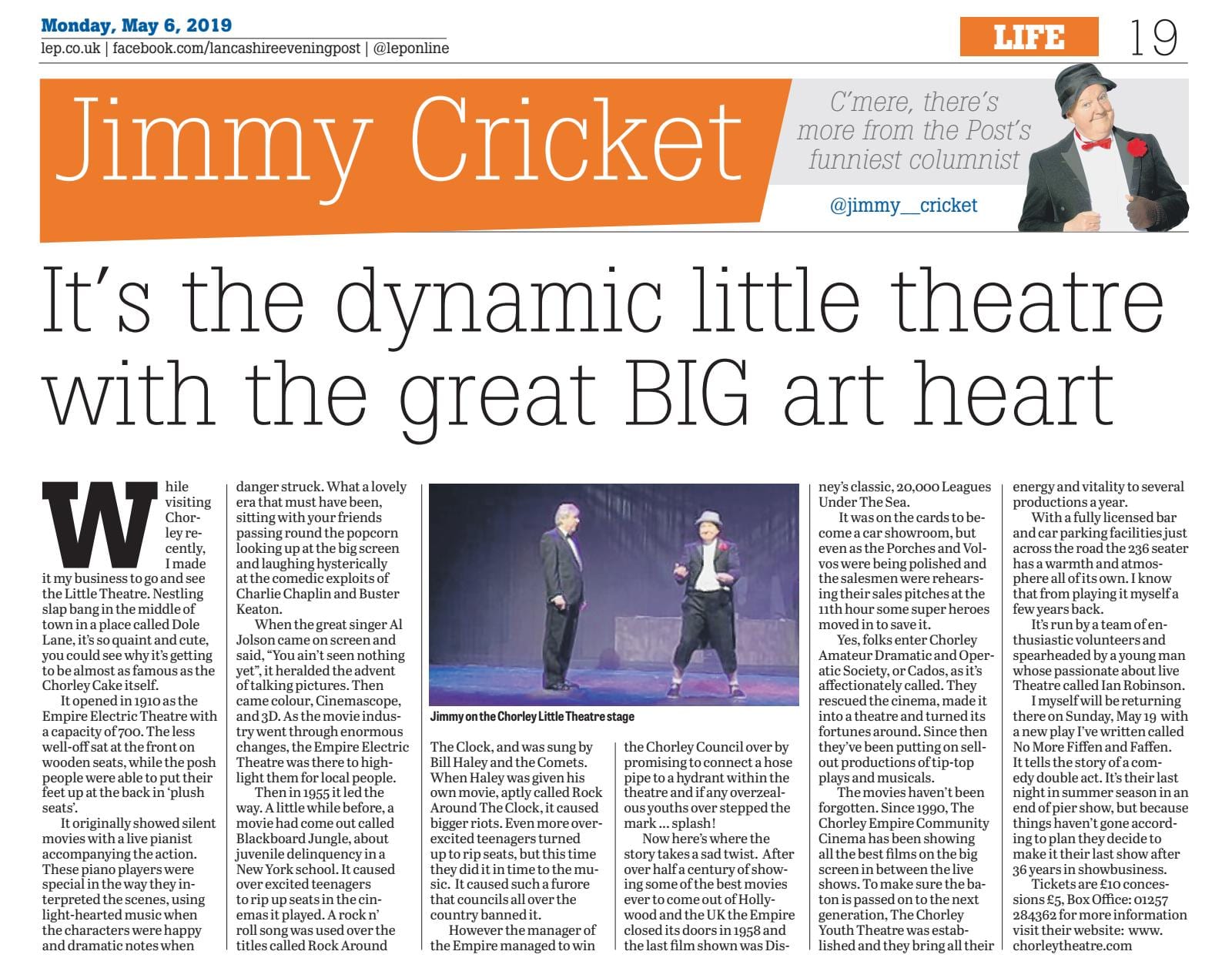 Jimmy Cricket has been telling readers of his monthly column about a small theatre which has “a warmth and atmosphere all of its own”.

The even-green Northern Irish comedian writes about working with Chorley Little Theatre in his latest column in the Lancashire Evening Post.

He begins: “While visiting Chorley recently, I made it my business to go and see the Little Theatre. Nestling slap bang in the middle of town in a place called Dole Lane, it’s so quaint and cute, you could see why it’s getting to be almost as famous as the Chorley Cake itself.

“It opened in 1910 as the Empire Electric Theatre with a capacity of 700. The less well-off sat at the front on wooden seats, while the posh people were able to put their feet up at the back in ‘plush seats.

“It originally showed silent movies with a live pianist accompanying the action. These piano players were special in the way they interpreted the scenes, using light-hearted music when the characters were happy and dramatic notes when danger struck. What a lovely era that must have been, sitting with your friends passing round the popcorn looking up at the big screen and laughing hysterically at the comedic exploits of Charlie Chaplin and Buster Keaton.”

Jimmy finishes off his column by saying: “With a fully licensed bar and car parking facilities just across the road the 236 seater has a warmth and atmosphere all of its own. I know that from playing it myself a few years back.

“It’s run by a team of enthusiastic volunteers and spearheaded by a young man whose passionate about live Theatre called Ian Robinson.

“I myself will be returning there on Sunday May 19 with a new play I’ve written called No More Fiffen and Faffen. It tells the story of a comedy double act. It’s their last night in summer season in an end of pier show, but because things haven’t gone according to plan they decide to make it their last show after 36 years in showbusiness.”

Tickets for Jimmy’s show at the Chorley Little Theatre are £10 concessions £5, Box Office: 01257 284362 for more information visit their website: www.chorleytheatre.com 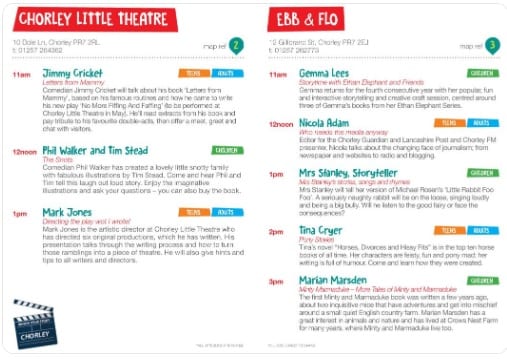 Jimmy Cricket will be talking about his famous Letters from Mammy and how he came to write his first comedy play at a special event in a Lancashire town at the weekend.

The well-known comedian is taking part in the fifth Festival of Words, What’s Your Story, Chorley? on Saturday (30 March).

Read more here about Jimmy’s session, which takes place at Chorley Little Theatre between 11:00 and 11:45am.

Jimmy’s play, No more Fiffing and Faffing, had its debut last September at the Blackburn Empire Theatre and he will be back at the Chorley Little Theatre on 19 May to perform it there as part of a North of England tour.

All-round entertainer Jimmy, who wrote the play, also appears in it, along with Jonathan Young from The Bachelors, and actor Colin Meredith, who has made several appearances in ITV’s Coronation Street over the years.

Looking ahead to Saturday’s event, he posted on social media: “Hi everyone excited to be part of “What’s Your story Chorley” festival at 11am on Sat 30th March @ChorleyTheatre when I will talk about the books and Comedy Play I’ve written followed by my pal @Philwalkercomic who has a great children’s book out at the moment currently on sale.”

The organisers tweeted: “This Saturday we have our fantastic free festival of words taking place, What’s Your Story, Chorley? We are pleased to have .@jimmy__cricket .@Philwalkercomic and .@steady333 taking part on the day. #whatsyourstory.” 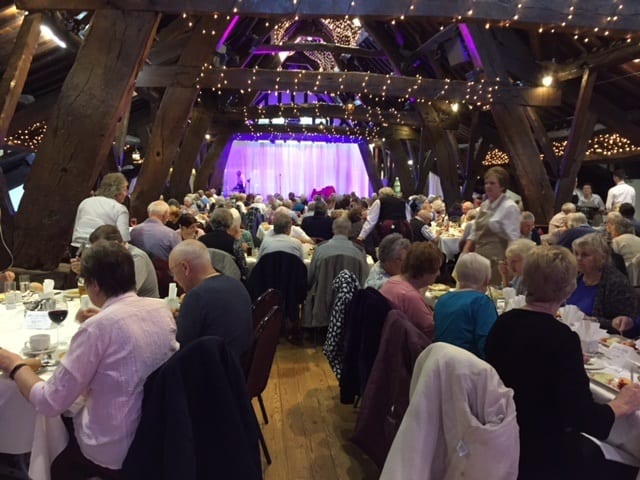 Jimmy Cricket performed two afternoon shows at what he describes as the “wonderful” Rivington Hall Barn in Lancashire.

Rivington Hall, situated between Bolton and Chorley, has been home to the Salmon family since 1953 and hosting events in the adjacent Hall Barn ever since. 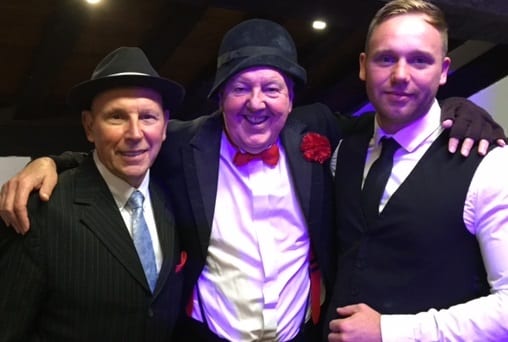 The barn is an historic Grade ll listed building believed to date back to the 12th century and still retains original features including its huge Saxon beams.

Jimmy did the two shows, which were part of the venue’s annual series of special luncheon events, with his old friend Keith Swift.

Both are pictured here with two of the owners, Matthew above and Trish below. 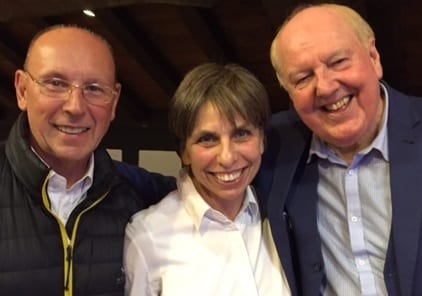