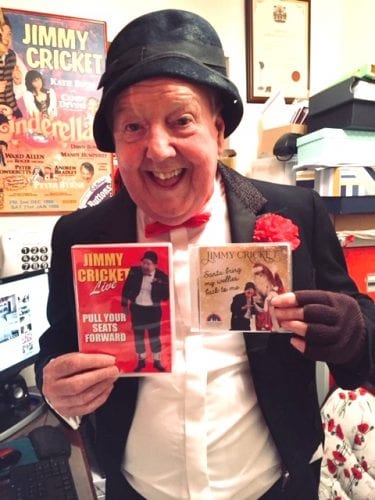 Jimmy Cricket was interviewed on the radio by a relative recently!

The Northern Irish comedian chatted to his cousin Pat Breslin, who as well as being a professional entertainer himself, is a presenter on Black Country Radio, which broadcasts across part of the West Midlands.

Jimmy was asked about his Christmas CD,  Santa bring my wellies back to me, which first went on sale two years ago and has now sold around 1600 copies.

Jimmy posted on social media: “Was interviewed by my cousin Pat Breslin! Listen to our chat here, as we also promote my Christmas CD, with all the proceeds going to ⁦@FrancisHouseCH⁩ http://www.blackcountryradio.co.uk/radioplayer/od/items/1827/ …

The interview with Jimmy begins at 2:05:20; towards the top of the page on the link above, press the play button (arrow pointing right) and then drag the white circle along the black band to this time.

Famous funnyman Jimmy said that when another 400 copies of the CD have been sold, it will have raised £10,000 for the hospice.

The name of the CD relates to the theft several years ago of concrete wellington boots (below right)  given to Rochdale-based Jimmy by friend and fellow comedian, the late Sir Ken Dodd. They were never recovered.

All proceeds go to Francis House Children’s Hospice which is based in south Manchester and is a favourite charity of Jimmy’s.

For more details about this special offer, go here.