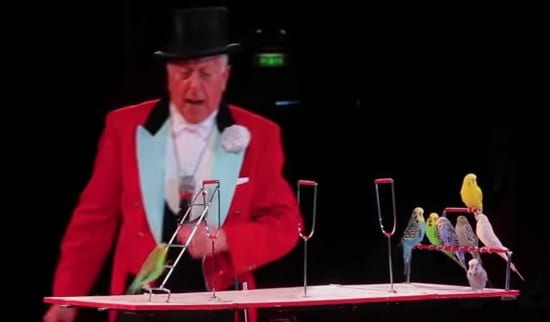 Norman Barrett has worked with all the world’s great circuses, including in Blackpool

In a special series of monthly articles starting today, Jimmy takes a trip down Memory Lane to recall some of the special people with whom he has shared the stage.

Norman has made many appearances on television, including with Charlie Cairoli – the Italian-English clown, impressionist and musician – in the children’s television series Right Charlie.

He is well known for his act with performing budgerigars.

Norman, now 85, has worked with all the world’s great circuses and spent 25 years at Blackpool Tower Circus during an amazing career.

He was also the ringmaster of the Belle Vue Christmas Circus in Manchester in the 70s and 80s.

He appeared as the subject of This Is Your Life in 1990.

Norman was awarded an MBE in the 2010 New Year Honour’s list.

Here, Jimmy remembers Norman in his own special way:

“I remember seeing Norman on television in the sixties. He was the ringmaster at the famous Tower Circus in Blackpool and he used to pop up at Christmas time.

“As well as introducing specialty acts from all over the world, he played straight man to the famous clown Charlie Cairoli. He got many a custard pie thrown in his face.

“However, Norman did a wonderfully unique act himself.

“He used to train budgies to run up ladders and push tiny bicycles.

“Norman learned to give instructions in different languages, so he used to take his act all over the world. He was particularly popular in Germany.

“Anyone that ever saw Norman’s act never looked at  a budgie in the same way again.

“I did four-week panto run with him at the Southport Theatre a few years back where he played Baron Hardup to my Buttons.

“We did a slapstick kitchen routine in which we were always putting in new stuff.

“So much so that my son Frank who was also in the panto used to say: ‘You guys really live on the edge!’

“… You could see all the lights on in the bedroom upstairs so you knew Norman was putting his budgies through their paces to help them get used to the Circus spotlights.

“Thanks for the golden memories Norman.”

What a lovely reception on Teesside!