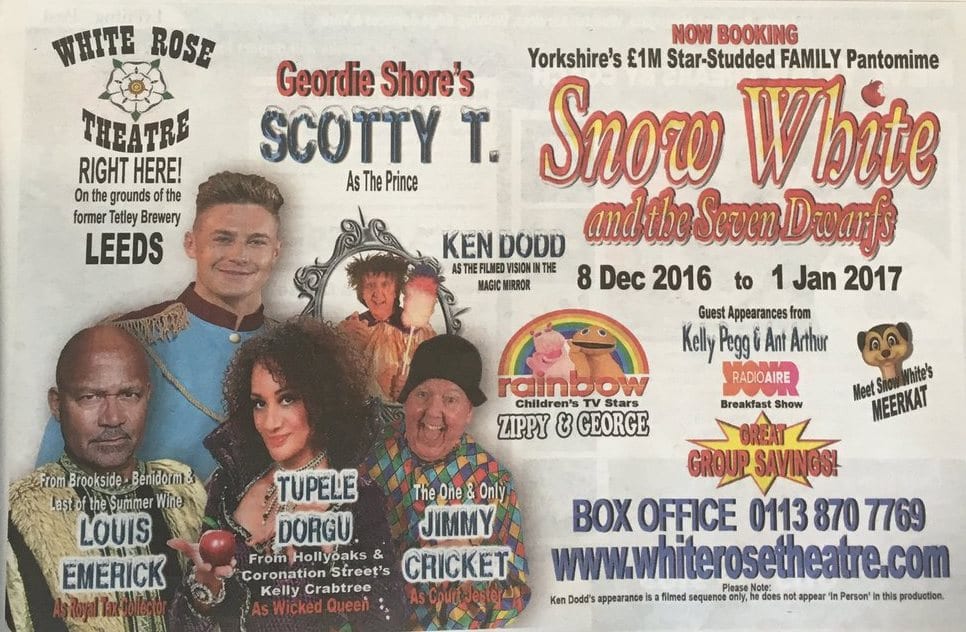 Popular veteran entertainer Jimmy Cricket is about to begin rehearsals for the pantomime he will feature in over the Christmas and New Year period.

The 71-year-old comedian will play the Court Jester in the classic fairytale Snow White and the Seven Dwarfs at the White Rose Theatre in Leeds City centre from 8 December 2016 to 1 January.

The White Rose Theatre is a new 1,400-seater arena, erected in a large marquee complex located within the premises of the Tetley contemporary arts gallery and near the city’s main train station.

This first evening performance on Friday 9 December will be a special charity preview of the show, where three local charities will stand to benefit greatly as all ticket sales will be shared out between them.

The panto also features reality TV celebrity Scotty T, who won this year’s Celebrity Big Brother on Channel 5 and will play the role of Prince Charming.

Actors Louis Emerick (from Last of the Summer Wine and Brookside fame) and Tupele Dorgu (who has featured in Coronation Street and Hollyoaks) will play the roles of the Royal Tax Collector and the Wicked Queen respectively.