The well-known Northern Irish funnyman did two shows on 16 and 17 October, which were part of the venue’s series of special lunchtime parties, with his old friend Keith Swift, a singer.

And he posted on social media later: “Have enjoyed working over the last two afternoons at the wonderful @Rivington_Barn, my thanks to Kevin, Matthew, Trish, Jill, Ben and all the staff, who helped to make my Birthday very special, (alongside my Twitter friends), here also with my fellow act and friend Keith Swift.”

Rivington Hall, situated between Bolton and Chorley, has been home to the Salmon family since 1953.

The barn had been empty after World War II and, following refurbishment, it became a venue for all types of events and has continued to be since then.

Above: Jimmy plays the saxophone while fellow cast members and staff sing ‘Happy Birthday’ to him.

Below are some of the photographs Jimmy posted on social media from the shows. 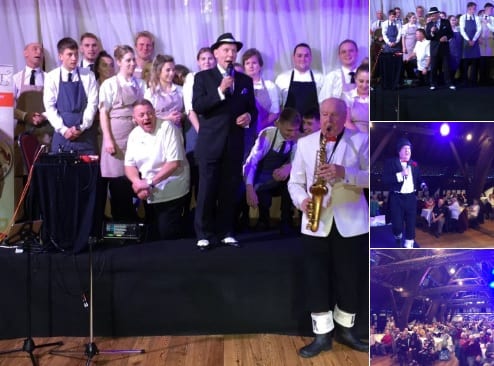