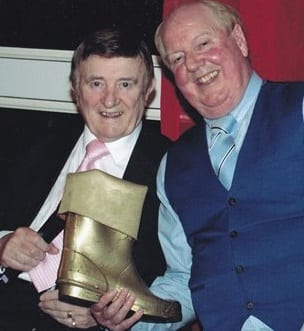 The comedian and the birthday girl

Jimmy Cricket had this photograph taken with a lady called Sandrea at The Royal Toby restaurant in Rochdale when he was last there with the Wooden Hut Club – his showbiz fraternity luncheon club.

Sandrea goes to a local Rochdale gym and it was her birthday, so to celebrate she and some friends decided to have lunch at the Royal Toby.

Famous comedian Jimmy – being his usual gregarious self! – not only went over to have a chat, but managed to get this snap of him and the birthday girl.

It's great getting older......You get to see what happens next.

Hi folks! Here’s a story from my November column @leponline where I got cancelled, but this star studded show went on,😂 😂 sometimes thats Showbusiness! #keepvarietyalive pic.twitter.com/Lb0xyKhO9E