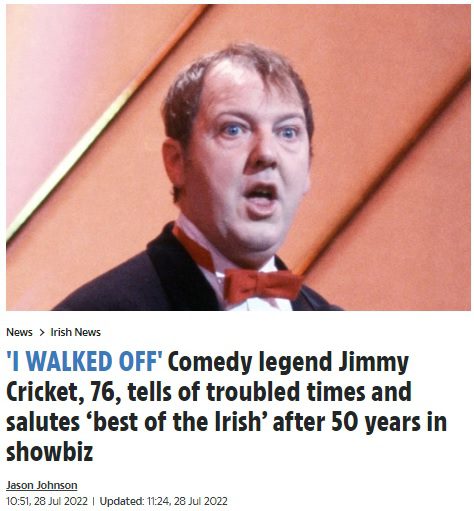 An Irish newspaper has marked ‘comedy legend’ Jimmy Cricket’s 50 years in showbusiness with a fascinating article about his life and career.

Among many other things, Jimmy tells the Irish Sun about walking off stage after being verbally abused over terror attacks in Northern Ireland.

He highlighted the Irish Sun piece on social media, saying: “My thanks to Jason Johnson @IrishSunOnline who interviewed me about my life and times (while sharing some of my own personal experiences) in the world of showbusiness!”

The headline describes Jimmy as a “comedy legend”.

The feature reads: Laughs legend Jimmy Cricket has paid tribute to “the best of the Irish” who entertained millions through the darkest days of the Troubles.

The madcap star, who fronted his own prime-time ITV show in the 80s, saluted colleagues as he gears up to mark a mighty 50 years in showbiz.

In a revealing interview, Jimmy told of walking off stage after being hit with vile abuse over terror attacks in Northern Ireland.

And he told how he was criticised over his own befuddled Irish comedy creation.

Yet the comedy veteran has no plans at all to hang up the iconic L-R boots saying: “I’m going to bop ‘til I drop.”

Looking back over his career, which includes being honoured with a Papal Knighthood for his charity work, Jimmy said his goal has always been to entertain but never embarrass the audience.

He said his family-friendly alter ego, who receives regular ‘letters from mammy,’ is a “sympathetic character.”

He told the Irish Sun: “I want the audience to love me, to be honest.

“Maybe it is insecurity or needing reassurance, but I enjoy the sympathy for the downtrodden character.”

He said his Christian faith has “defined me I suppose, and the type of material I do”.

Yet the intentions directed towards the undertaker’s son have, in years gone by, not always been kind.

Lancashire-based Jimmy told of performing in Morecambe in the 70s “and I hadn’t been long in the business full-time”.

He added: “A fella came up to the front of the stage and he was remonstrating about the British soldiers getting killed on the streets.

“The audience was telling him to ‘sit down’ saying ‘it’s not a political rally’ and ‘the fella is just trying to make us happy.’

“Obviously he was escorted off by security but I was quite raw then and inexperienced.

“To be honest it upset me so much I walked off.”

‘I can’t change my accent’

He said as his popularity soared and the big breaks came, he was again targeted on stage – but this time over gags some felt “made fun of the Irish.”

Jimmy said: “I’ve seen both ends of the circle.

“I remember one particular time there was an organised shouting up to the stage about it.

“It’s the old story nobody kicks a dead dog. When you get a bit of fame obviously people latch on for their own reasons.

“My character obviously is going to be silly because that’s part of me. And I was born in Ireland and I can’t change my accent.

“But there was a lot of comics in the 70s who weren’t Irish doing Irish jokes and my fellow countrymen and women could maybe get a bit upset about that.

“I can understand that, but it’s all changed now. I get as many Irish as English come to my shows, which makes me feel really good.”

Also read: Who was Jimmy’s hero while growing up in Belfast?