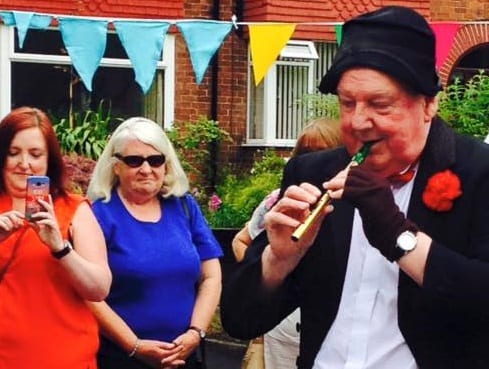 Jimmy Cricket was a star guest at a special garden party held in Doncaster at the beginning of July.

The event was arranged by Susan Humphries, the wife of Dick Van Winkle, a multi-instrumentalist who worked on the variety circuit over the years, in summer season shows or on cruise ships.

Dick, unfortunately, has developed Alzheimer’s disease and so the garden party was organised by Susan to raise funds for the Alzheimer’s Society.

It featured stalls, events and attractions plus tea, coffee, cold drinks and other refreshments.

As well-known entertainer Jimmy had worked with Dick (left) in the past, he was asked by Susan to open the summer fair alongside the Mayor of Doncaster. This was the second time she has arranged a summer party to raise funds for this worthy cause and the latest one was much larger with more people present.

Also in attendance at this year’s event were the comedians Duncan Norvelle and Mike Lancaster.

Alzheimer’s disease is the most common cause of dementia, a set of symptoms that can include memory loss and difficulties with thinking, problem-solving or language. These symptoms occur when the brain is damaged by certain diseases, including Alzheimer’s.

* The photographs are courtesy of Jain Wheatly and Susan Humphries.