Fr Frankie, who has been a catholic priest for almost three years and is currently assistant priest at St Joseph’s Church in Blackburn, went on a January break to Rome after a busy time over the Christmas season. 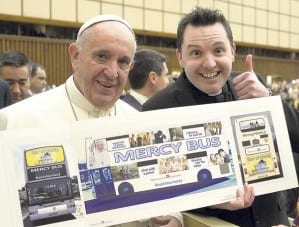 While on holiday in Rome, Fr Frankie attended a papal audience and arrived at the Vatican with a picture of a special project he had been working on called the Mercy Bus. After the audience had concluded, Fr Frankie approached Pope Francis for a blessing for his project, which the Holy Father duly did.

The Mercy Bus project is an activity Fr Frankie has been heavily involved with and is very passionate about. It is a bus which has been commissioned by the Salford Diocese to tour around its various regions every Saturday afternoon throughout the period of Lent – a special time within the Catholic calendar. Wherever the bus stops, it will offer those who visit it the chance to meet a priest for a chat or to take part in an act of confession.

The places the bus has already visited or is still to visit include: Salford, Bolton, Burnley, Blackburn, Bury, Ashton-under-Lyne and north and south Manchester. The project also ties in with the current Jubilee Year of Mercy, which Pope Francis himself launched last December.

Cricket team to turn out in aid of Bury fundraiser

Next trip to Spain will include Madhouse shows