Jimmy Cricket attended a party organised to mark his son’s farewell from the Roman Catholic church in Clitheroe where he has been placed for the last 18 months.

By sheer coincidence, Jimmy happened to have an afternoon show at a nearby arts centre, so afterwards he went with his wife to St Michael and St John’s Parish Centre to be part of what turned out to be magnificent send-off for Fr Frankie Mulgrew (below right).

Jimmy said: “I was thrilled to see the reception he was being given from all those parishioners present.

“The highlight of the leaving party for me was the children’s choir from St Michael and John’s RC Primary School where Frankie was the chaplain. The choir sung a fantastic rendition of the song Let it go from the Disney film Frozen.

“The evening was capped off when Fr Frankie was presented with a magnificent cake, which was made by one of the church’s talented parishioners!” 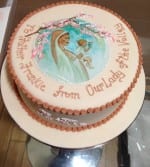 Fr Frankie, who has been succeeded at St John’s by Fr Joe Gee, has moved to a new Catholic church in Blackburn – another part of the diocese of Salford where he serves as a priest.

His duties in Blackburn will also include him taking up a part role as the Catholic chaplain at Royal Blackburn Hospital.

He was ordained on Saturday, 13 July 2013 at Salford Cathedral by the Rt Rev Bishop Terence Brain – the then Bishop of Salford – and in the presence of the Rt Rev Mark Davis, Bishop of Shrewsbury.