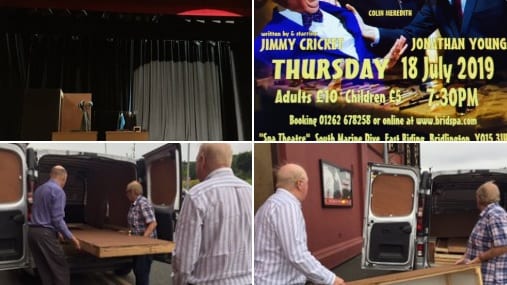 Jimmy Cricket expressed his thanks to staff and friends at the Bridlington Spa theatre after the latest staging of his comedy play.

The East Yorkshire coast venue hosted No more Fiffing and Faffing on Thursday (18 July) as part of a North of England tour.

No more Fiffing and Faffing had its debut in 2018 at the Blackburn Empire Theatre and has also played in Bury and Chorley.

Jimmy wrote No more Fiffing and Faffing and also performs in it.

The other actors are Jonathan Young from The Bachelors and actor Colin Meredith, who has appeared in ITV’s Coronation Street.

Jimmy posted on social media: “My thanks to all the staff at the wonderful #SpaTheatreBridlington for tonight, and to all my friends who helped with loading and putting the set together for the performance!

The play is about double act Joe Fiffen and Jerry Faffen who are on their last night in showbusiness.

They attempt to settle some old scores in the dressing room.

Ready for return to Club Tropicana in Skegness

Casual chat with a workman led to my first DVD!

‘I enjoyed that Cocker!’ The first time I met Bobby Ball